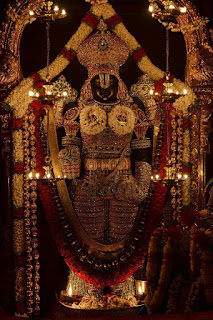 TIRUPATI BALAJI
My religious bend has always been there, thanks to my parents for inculcating these sanskaras in me from childhood days. As I grew up in Bangalore we had visitors quite often, so taking them around as part of the package. In fact, the visitors always had one place in common which was visiting the holy shrine of  Balaji (Tirupati). Tirupati which was only 60Kms from Chittoor, AP was barely 5 hours drive from Bangalore. Ever since then there are so many stories that I had heard about Lord Venkateshwara --- let me share a few
1. Apparently there was a ritual to be conducted, the sages and pontiffs were in a confusion as to which god the ritual shall be dedicated to. For the decision-making, they called sage Bhrigu, who conducted a test, first went to King of Gods, Indra. Indra did not acknowledge Bhrigu's presence as busy in enjoying the dance of apsaras in heaven. Bhrigu cursed Indra that he would only be referred to as an egoistic soul all over the universe. He next visited Brahma. Brahma was busy with his four heads chanting the Vedas, doing meditation, creating the world, and spending his time with his consort, Saraswati. Bhrigu cursed Brahma that he would not be worshipped by the creatures on earth anymore. Next, he visited Lord Shiva. Shiva was busy in his Rudradhyanam with his consort, Parvati, at his feet. Bhrigu cursed Shiva that he would be worshipped only in the formless Lingam. At last, Bhrigu went to Lord Vishnu.
Vishnu was sleeping on Adishesha and Lakshmi was at his feet. When Bhrigu arrived, he first saw Vishnu's feet and felt too humiliated. Enraged, he kicked Vishnu on his chest and thus awakened, Vishnu started massaging Bhrigu's feet and served him with great hospitality. Bhrigu was pleased and ordered the sages to perform the rites to Vishnu. Goddess Lakshmi, also known as Sri, had a fight with Lord Vishnu as she felt that Bhrigu insulted her indirectly by hitting Vishnu on his chest where Sri lived and thus left Vaikuntha. She came and settled on earth in disguise as a young sage like the boy in the ancient city of Karvir (Kolhapur) and meditated for Vishnu where today the Mahalakshmi temple is situated. Lord Vishnu soon arrived on earth searching for Goddess Lakshmi. But He failed to find her and instead settled on Seshachalam hills inside an anthill. Thus, Lord Vishnu reached the place of pilgrimage of Lord Varaha Swamy in Tirupati, Tirumala. Turns out, Tirupati was also the place where Adi Varaha swami rested and taught Karma Yoga to the people till the beginning of Kali Yuga after rescuing Earth from the wicked Hiranyaksha. Hence, Lord Vishnu sat inside an anthill in his disguise which was situated under a tamarind tree and started chanting the name of Goddess Mahalaxmi.
Lord Shiva and Lord Brahma disguised as cow and calf grazed by a shepherd of the Chola kingdom, the cow used to pour her milk in the anthill to lessen Vishnu's thirst. When the shepherd got to know of the same he wanted to kill the cow and hence removed his axe. Vishnu protected the cow by rising up from the anthill and the axe went back and killed the shepherd. The story reaches the king's ear and finds the cow quenching thirst of a boy who was Lord Vishnu himself, which the king did not realize. King in the want of killing the cow raised his bow & arrow, got cursed by Vishnu that he shall take birth as a demon. The king apologized for his mistake and asked for mercy, for which the Lord mentioned that he shall take birth as Srinivasa and will marry his daughter (Padmavati) in Dvapara Yuga.
2. For marrying Padmavati, Srinivasa had borrowed a huge sum from Kubera and promised to repay the loan with interest till the end of Kaliyuga. Sage Narada informed Lakshmi about the wedding. Fuming Lakshmi confronted Vishnu. The clash made Srinivasa turn himself into stone with Lakshmi & Padmavati also stoned on either side.
Such age-old stories, which have been told one generation after the other. The Tirumala Hills are part of the Seshachalam Hills range. The hills have seven peaks representing the seven heads of Adisesha. They also say that Lord Srinivasa of Tirupati (one of the richest temples in India) is still paying back his debts to Lord Kubera. Interesting are such mythological and historical stories. Well even to date Tirumala has such a mesmerizing Aura and HIS grand presence that certainly keeps me spellbound.
This blog post is part of the blog challenge ‘Blogaberry Dazzle’ hosted by Cindy D’Silva and Noor Anand Chawla, and generously SPONSORED BY Bugshield Clothing – Don’t be Bugged!